I am a creative and thoughtful writer who understands how to communicate complex ideas clearly. I have a record of high performance in readership numbers in nationally distributed media, along with publication in popular and academic journals. I am a respected and well-liked community member with a talent for building networks. 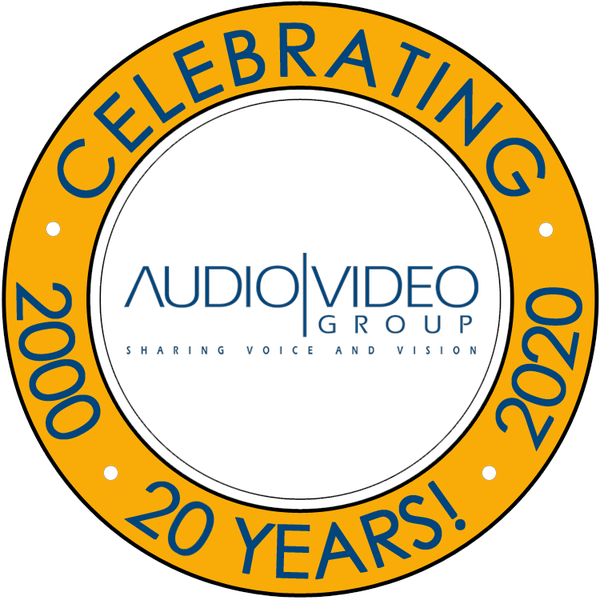 Eric Johnson founded Audio-Video Group in 2000 because he wanted to build relationships with clients in his community and ensure they could spread their message effectively. Now, 20 years into the life of Audio-Video Group, he’s reflecting on the journey and what he has accomplished. Eric discovered his love of electronics while in high school and graduated from college with an Associates Degree in Electronics Technology. He worked in nurse call and school intercom systems until his father, a c 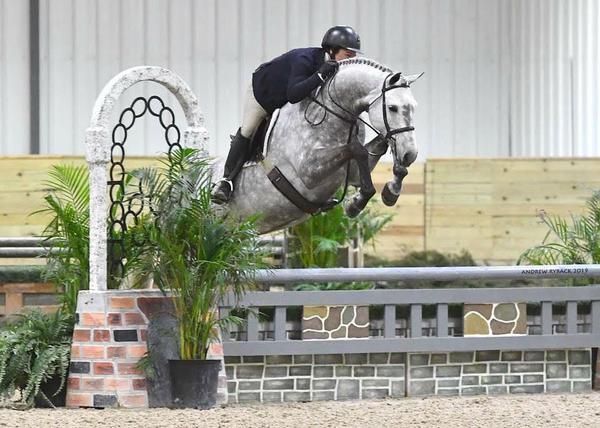 Ashley Holsinger’s Memory’s Hill Stables started with a vacant farm and a dream, but Holsinger’s equestrian career began long before her Virginia farm. For a horse-crazy kid, the next best thing to growing up on a horse farm is to have access to riding through family. Ashley Holsinger, now a professional hunter trainer in Waynesboro, Virginia, had an aunt and cousins who rode horses. “They rode Arabians and saddlebreds,” she said. “I would come home from visiting them and beg for riding lessons 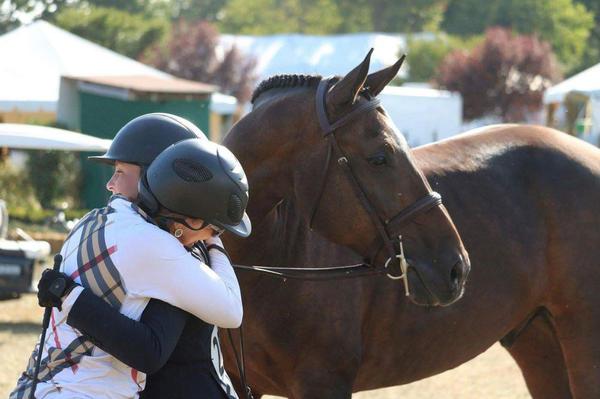 From Backyard Ponies to A Shows: Ada Cosby’s Career Proves the Power of Loving the Process | The Plaid Horse Magazine 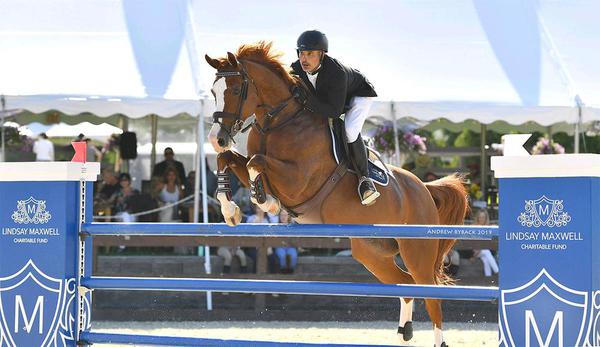 JJ Lavieri had what was, for many horse lovers, the dream childhood. His parents owned a Venezuelan cattle ranch where he spent much of his time. “I was always on a horse,” he said. At eight years old, JJ began taking English riding lessons and fell in love with the change in discipline. He wanted the western horses to be his hobby and the English riding to be his sport. Even as a young person, that’s how he set up his equestrian life. Parents supportive of his passion, JJ found an early mentor 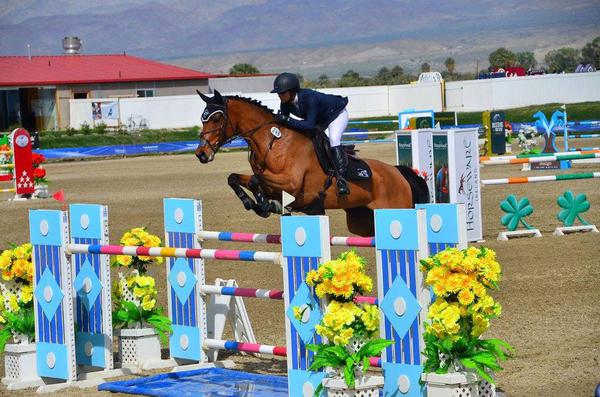 Morgan Caplane got her start in horses in the most delightfully unfettered way a child could, and has grown that seed of passion into a successful imports and sales business in California. Her desire to be in the barn every single day has turned into the gift of finding the right horses for specific jobs. Neither of Caplane’s parents were horse people, but when she was a young child they bought a property in Mariposa as a weekend getaway. “The guy who came to do the fencing told them the proper 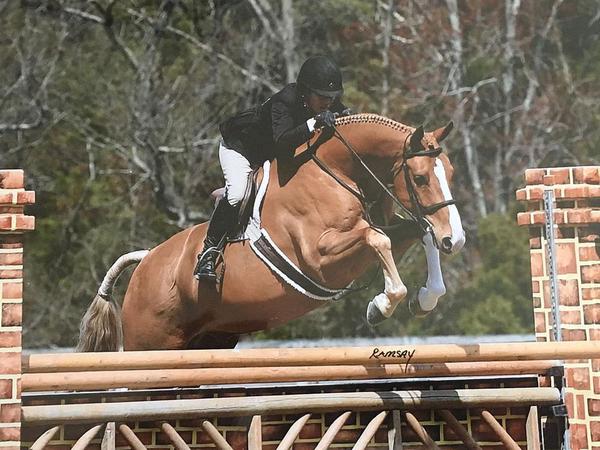 Peg Seals: From a $100 Pony to the Hall of Fame | The Plaid Horse Magazine

Peg Seals got her start riding ponies at birthday parties, and is now one of the top professionals on the East Coast. She owns Freedom Farm in Smithfield, Virginia—a full service boarding and training facility serving the hunter/jumper crowd. “When I was a little kid, I learned that it was possible to rent birthday party ponies for $8 a day. And then I realized it didn’t have to be my birthday to rent the ponies! So I would save up my $8 and rent a pony for a day. I probably rode the ponies’ le 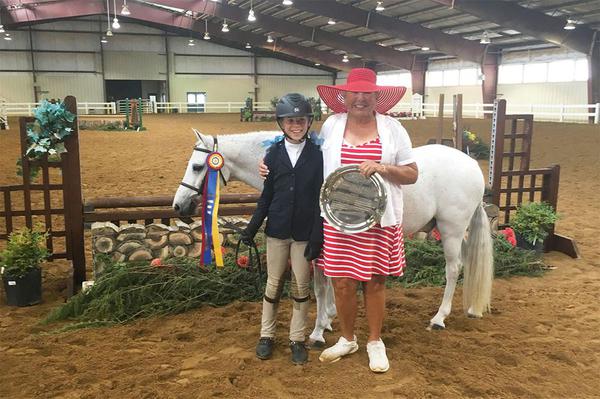 Pam Baker’s name is familiar in the hunter/jumper world, and with good reason. She has spent a lifetime in the industry. A master of the craft, she has worked with horses and riders for decades. Baker’s equestrian lineage goes back to Captain Vladimir Littauer and Clayton Bailey, early proponents of the American system of forward riding. “The only reason I’m still in the business is that I went to a clinic when I was a teenager that Captain Littauer was giving, and I’d never heard anyone talk a 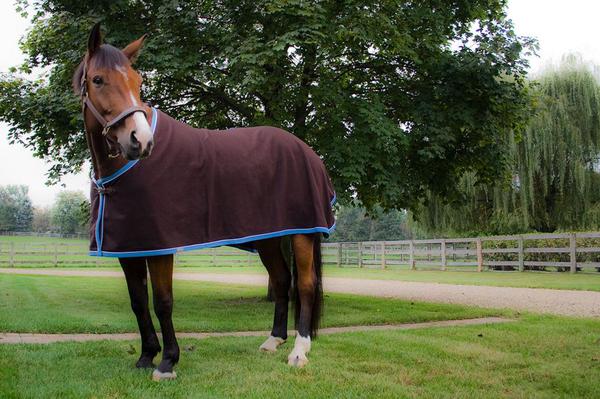 There’s something so elegant about the perfectly turned out horse in a custom cooler. For decades, The Clothes Horse has set the bar for horsewear and is well known for providing the awards coolers for The Devon Horse Show. They feature almost limitless color and pattern options with attention to even the smallest detail to appeal to every horse owner. We sat down with Katrina Coldren, owner of The Clothes Horse since 2001, to learn more about this incredible legacy brand and her involvement in 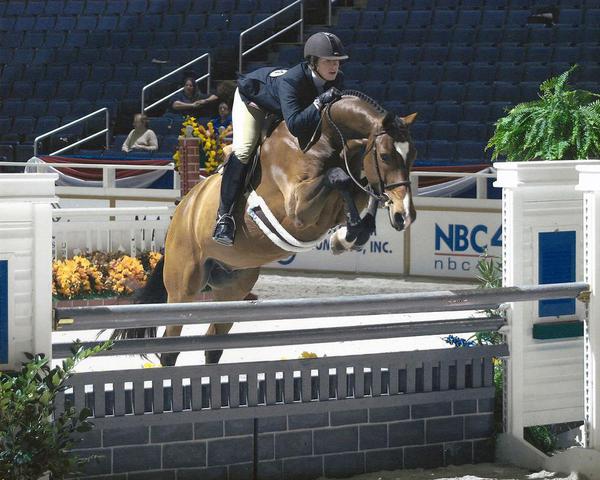 Maria Shannon has been riding since before she could walk. She had the good fortune to be born into an equestrian family. Parents Tom and Claiborne Bishop, owners of The Barracks in Charlottesville, Virginia, taught her to ride, as did well known Virginia trainer Glenn Moody. Like Shannon, her parents have been lifelong equestrians. Her mother, Claiborne, began riding at age three with Elliewood Keith at Keithwood, where she would eventually meet Tom. The two married in 1970, the same year they 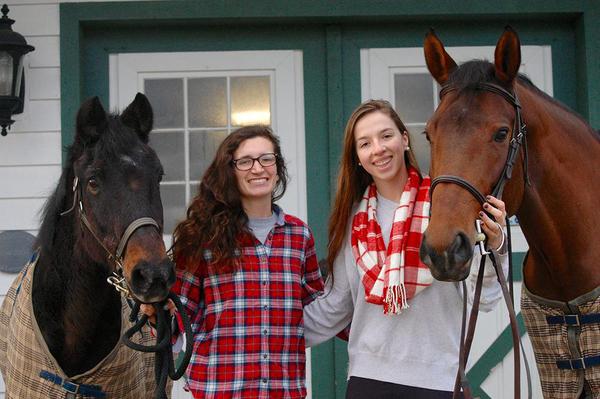 This Pride Month project of having queer equestrian conversations has been a special experience, and one that I hope readers are carrying on in their own communities too. One person I’ve been lucky to become acquainted with in this process is Kaitlyn Boggio, a 25 year old professional. She is currently the assistant trainer at Rendez-Vous Farm in Ashford, Connecticut. They specialize in hunter/jumpers and her responsibilities primarily involve showing client and sale horses. Boggio identifies as 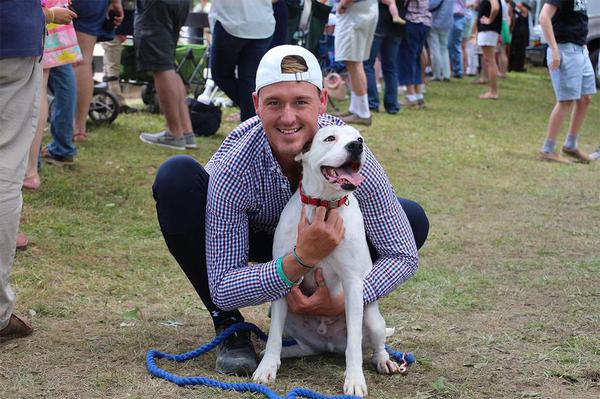 The horse world, at least the English side of it, seems to have a lot more openly gay men involved than in other professional sports. While it isn’t clear that the same can be said for other people in the LGBTQ community (we’re here, but we don’t always have as much visibility), this is part of what makes equestrian sports special. But what is it about the horse show world that seems to draw in more wonderfully openly gay men than other professional sports? Though no one story can give us all t 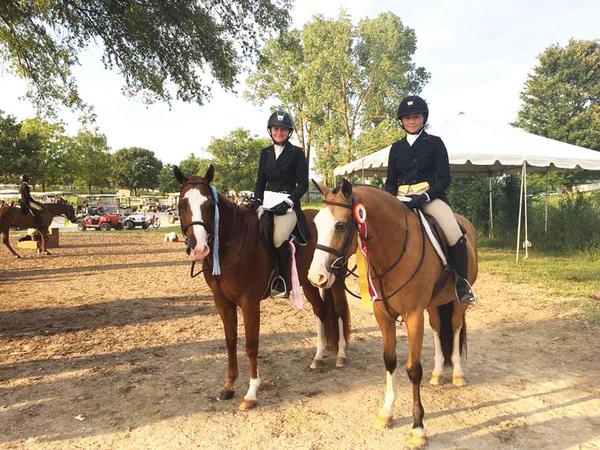 Alliyah and Kierstin Antoniadis are young riders demonstrating the value of horsemanship to a successful riding career. Many adults remember being horse crazy kids who were dropped off at the barn for an entire day- scrubbing buckets, cleaning stalls, riding whatever fuzzy lesson ponies they could get on. It’s a great way to learn about horses, but kids don’t always have those opportunities these days. Alliyah and Kierstin figured out how to make opportunity for themselves from a very young ag 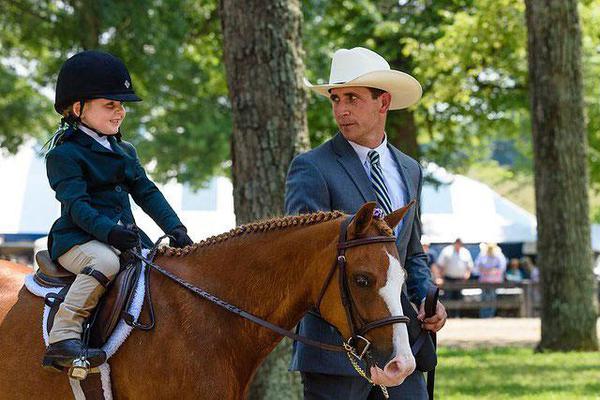 Zachary Parks and the Gift of Horses | The Plaid Horse Magazine

Zachary Parks had an unlikely start to his equestrian career. During his very first ride, on the beach in California, he fell off and got his foot caught in the stirrup and wound up in the intensive care unit. “I got hooked—literally,” he joked. Most people would likely call it a day at that point and move on to a different, safer hobby like skydiving… but Parks felt pulled back to horses. When his family moved to Charlottesville, Virginia, he was fortunate to be able to take riding lessons at 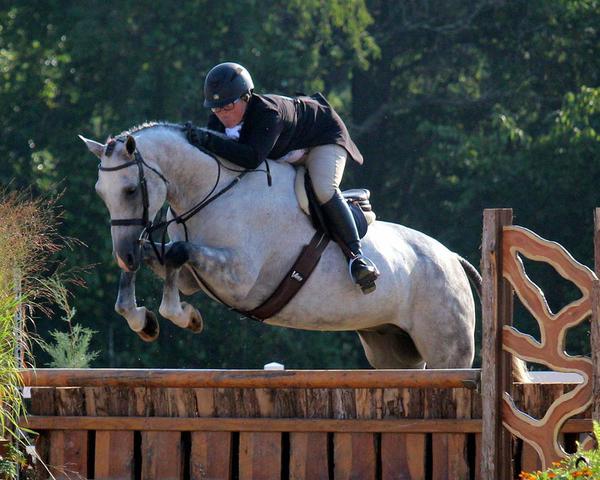 Kasey Evans understands that good things take time. The southwestern Virginia resident takes the long view on green horses and riders, which lets her keep an eye on what really matters: a solid education for the horse and rider that will serve them well in the long run. “I got my start later than kids do now,” she said. “I started riding at 10 or 11 and got my first horse when I was 13.” She rode with legendary Virginia hunter trainers like Chris Wynne and Pam Baker, which meant that she got th 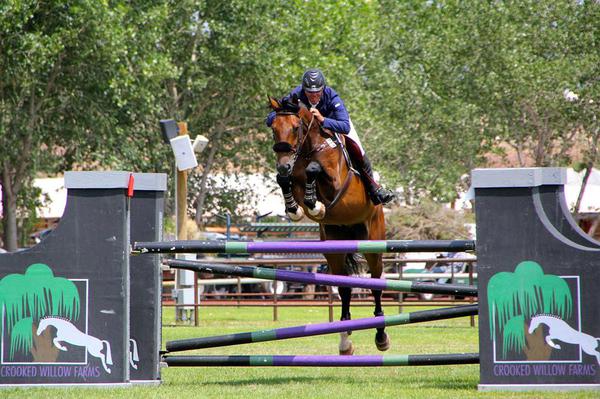 Matt Cyphert didn’t grow up in a horse family. His family didn’t push him into riding. He hasn’t been riding since he was a toddler. But he found his gift. Matt’s aunt owned horses, and when his family visited they would go on trail rides. “I fell in love with it. We rode western then,” he said. One day they came across a log, and he watched the other riders and their horses hop over it. He was more hesitant. “After a lot of encouragement from them, I jumped it. The next day I took my first E 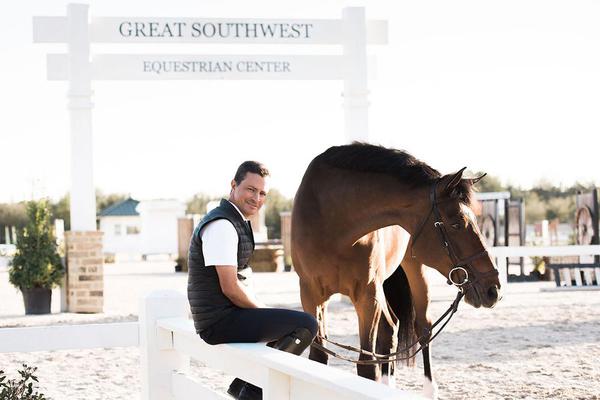 Daniel Bedoya was taught to respect and value horses from the start. Growing up in La Paz, Bolivia, his father, Daniel Bedoya Sr., won seven national jumper championships in Bolivia. But even more than his success in the show ring, Bedoya Sr emphasized that anyone who wants to ride needs to bring their best to the horses at all times. When Daniel describes his childhood in La Paz, he talks about how his father’s passion for riding motivated him to get up at 5am in order to ride before his job 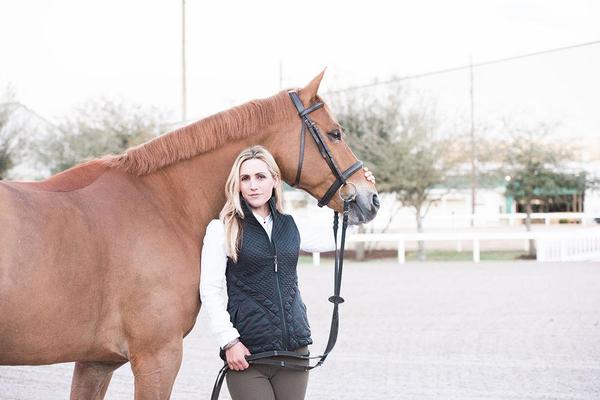 Natalee Haggan’s parents promised her a horse of her own when she was eight years old, provided she stuck with the riding lessons she begged for. She showed her dedication early, always staying late at the barn late to help out with chores. “Thirty years have gone by and I’m still waiting for the horse,” the now successful professional jokes. Natalee’s determination has opened doors. In 2000, she convinced the hiring manager at Medieval Times (a popular dinner theater chain restaurant) to tak 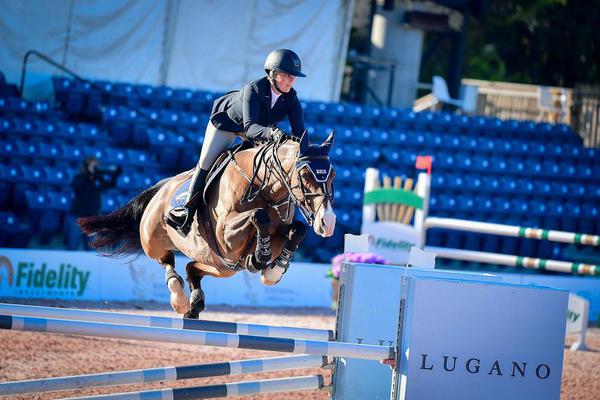 Briley Koerner believes in the importance of connection—both with horses and people. She started riding at six years old, and still thinks of her first trainer, Kim Cox of Tally Ho Farm, as one of the most influential people in her life. “Mrs. Kim taught me the ropes,” she says. Her horses, too, have taught her a great deal. “Every horse I’ve ever owned or ridden has definitely helped make me the rider I am today,” Briley says with gratitude. Her family, including older brother Barrett who sh 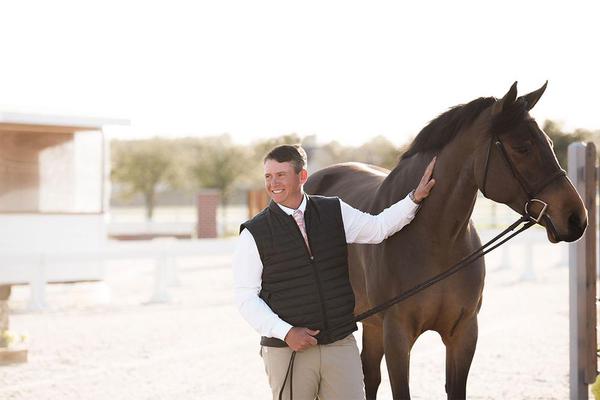 Frankie Owens was almost born in the saddle. His parents, Candie and Frank, were established professionals in the industry by the time he and his sister, Whitney, were born. Frankie was legged up onto horses from a very young age, and credits his parents for teaching him so much. “I don’t take for granted growing up the way I did,” he says. “The benefits of being raised in an established stable aren’t lost on me.” Frankie’s father, Frank Owens, was also raised around horses. His mother, Chris 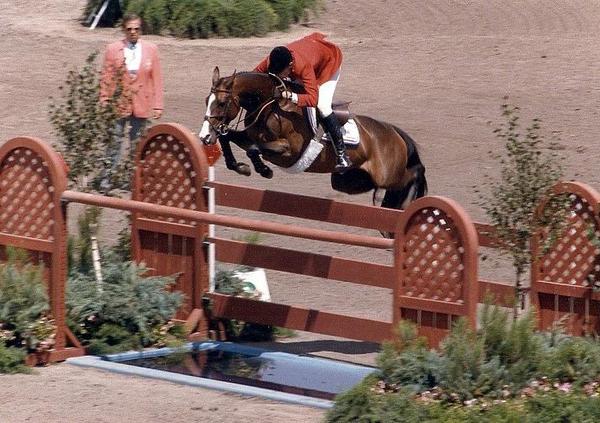 The hallways of the hunter/jumper sport are lined with champions, and one of the greatest on the wall is the Thoroughbred mare, Touch of Class. Touch of Class (1973-2001) was everything she wasn’t supposed to be in order to make it in the sport of show jumping. She’d had a brief career at the track (under her Jockey Club name Stillaspill) that fizzled out after six unsuccessful starts. For an elite show jumper, she was tiny at only 16 hands. She was hot. She seemed to cross-canter more often
Load More Articles
Close ✕